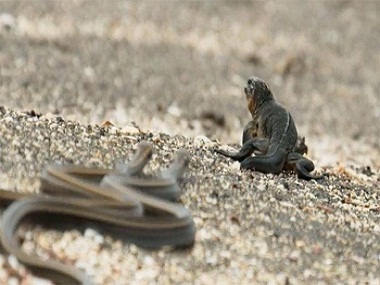 So maybe you’ve heard of this show on BBC called Planet Earth II. The show is a nature documentary, and actually a sequel to Planet Earth. It’s most likely you heard about it due to the first episode airing, and the intense scene between a baby iguana and a hoard of snakes.

An interview with the show’s producer Elizabeth White reveals the filming was much more graphic than was revealed. To quote, “Some of it was quite horrific. Because actually the snakes are not pack hunting – for the snakes, it’s very much every snake for themselves. We did see snakes eating other snakes and all fighting. We were like nah, that can’t go in. It’s too horrific!” Nope, no thank you. Not about this snake eat snake world.

However what they did release of the scene has gone viral, as watching the struggle between lizard and snake is probably more relatable than we thought. How often do we feel as though we’re barely escaping the clutches of several snakes wrapping around us in a ball? Maybe it’s just me, but if you want to know what that looks like you should definitely check out the video: