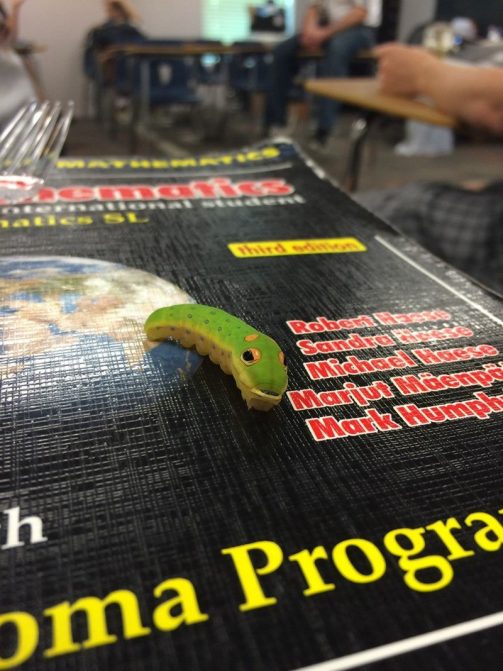 A tumblr user by the name of oddity-txt captured the hearts and minds of the natives when he adopted a small caterpillar, that he found on his way to class, and named it “Chicken Nugget.”

But much to his alarm, poor Chicken Nugget, once a proud lime-green caterpillar, began to turn slightly dull in color. Concerned for the well-being of his new caterpillar companion, he turned to the only place that can truly diagnose communicable diseases and bizarre ailments: the Internet. There, in all its wisdom, the Internet revealed that, “apparently Chicken Nugget is a Spicebush Swallowtail and they turn yellow before they pupate.“

And the world breathed a collective sigh of relief. Completely yellow in color now, Oddity decided it was time to make Chicken Nugget comfortable for his big transformation. Gathering the finest of materials (a stick and some leaves) he made Chicken Nugget what one might mistake for “The Ritz Carlton” of caterpillar dwellings. The caterpillar ate, drank, and relaxed as he prepared himself for the big transformation and Oddity was there to capture it all. Even going as far as to, “put on some tunez for him so he can get into the metamorphazone.“ And ten days went by…

When one day, upon returning home from school, Oddity found a beautiful black butterfly fluttering around his room… On the eleventh-day…Chicken Nugget rose and became Chicken Wing.

But, as an adult now, it was time for Chicken Wing to pack his bags and start paying for his own cable…

Oddity made sure he was strong, prepared to brave the big new world, and released Chicken Wing into the wild.